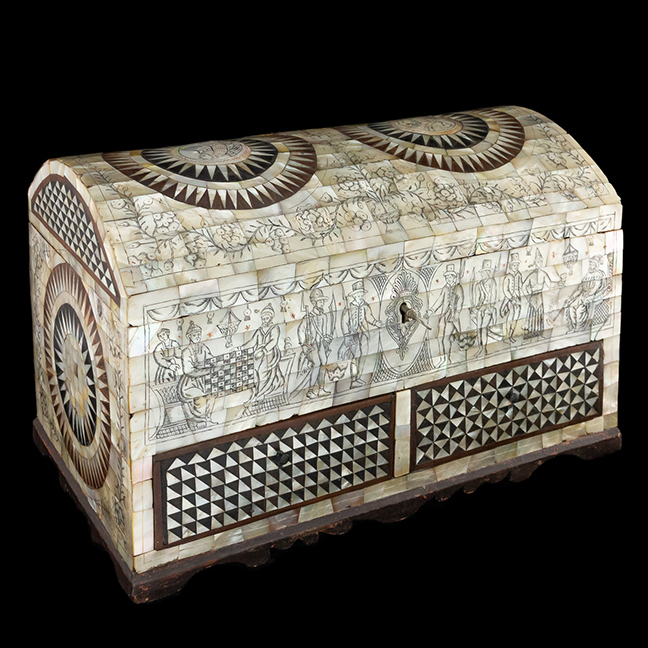 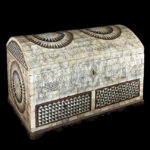 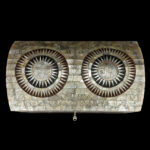 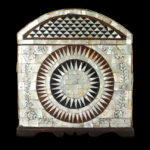 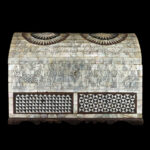 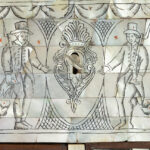 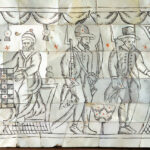 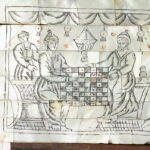 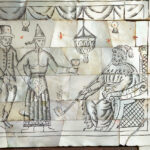 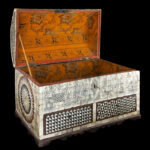 This magnificent 50cm long lidded casket, is an outstandibg example of Bethlehem craftsmanship in mother of pearl, olive wood and ebony-like inlay. It consists of a vaulted lid completely inlaid with 2 massive sunburst medallions on its ridge. The centre of these radiating medallions are mythical birds engraved on a single mother of pearl circle. The alternating wood and mother of pearl triangular radiant shapes give the box its identifiable character. These two sunburst medallions are inserted within a field of large rectangular mother of pearl modular parts that are seamlessly inset in the wooden box. The field is also finely engraved with opulant floral motifs emanating from two centrally aligned vases.

The front of the box bears a key which indicates that this casket would have been used either as a dowary box or a jewelry box. The field on either side of the key shows images of western figures between a Turkish dignitary/nobleman smoking a chubuk and being offered a drink by a servant (on the right side) and two Turks playing chess (on the left hand side). Below the key are two rectangular drawers in ebony-like and mother of pearl geometric repeat patterns, contrasting with the body of the box. The sides of the box resemble a vaulted room with a pierced screen, reminiscent to Mesopotamian Ninevan and Nubian Egyptian rural architecture. Below this screen analogy is another sunburst circular motif, similar to the ones used on the lid, but differing in that the central medallion is made of modular square mother of pearl units. The interior of this casket is finely outlined with black floral, vegetal and fruit arrays and coloured in a pastel green and aqua palette.

The condition of this casket is excellent which renders it even rarer than it already is.

enquire about this item