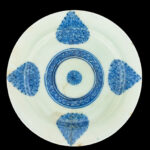 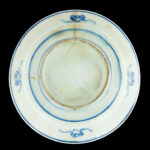 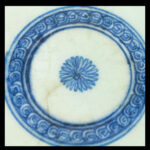 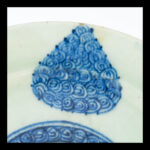 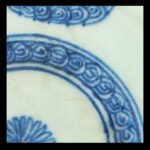 A 17th Century fritware Safavid dish made in the Armenian style, (School of Nazaret in New Julfa).

This blue and white minimalistic stunning design is composed of a central medallion with an aster flower as its centre, the medallion itself is composed of spiral scrolls resembling the golden horn design within double offset blue lines. The medallion radiates outwards with 4 axial perpendicular symmetric leaf-like shapes, again entirely filled with spiral scrolled formations. As the plate has no outer rim decoration, these leaf-like shapes draw the eye from the centre outwards beyond the physical limitations of the dish itself.

enquire about this item